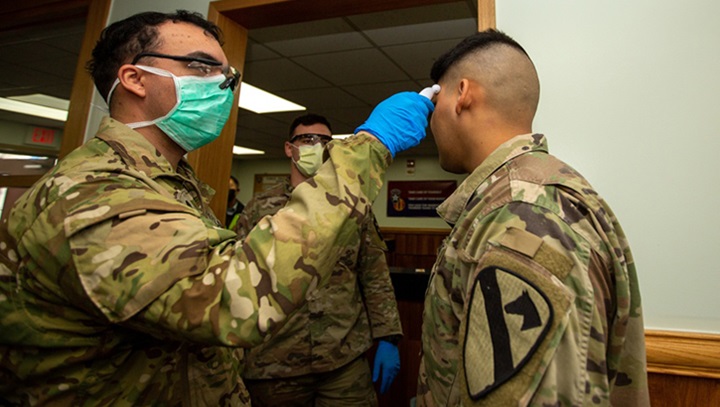 Contact tracing and biometric data have helped reduce the COVID-19 infection rate in U.S. Army Garrison Humphreys, which is reporting a total infection rate of less than one percent among U.S. Force Korea personnel, the U.S. Army announced.

“Our central presence in the command suite was very convenient for Colonel Tremblay,” said Dennis Stockwell, Directorate of Plans, Training, Mobilization and Security chief of plans and operations, and currently the task force lead in a prepared statement. “It allowed him to quickly consult the key players to make informed decisions that best protected the community.”

The taskforce is responsible with contact tracing to support the 65th Medical Brigade. Contact tracing began as soon as an individual tested positive. Not only was the person interviewed on movement history, but the information was checked for accuracy with surveillance footage and Defense Biometric Identification System data. If the contaminated person interacts with others, then they are also monitored and even quarantined to contain the spread.

“The first cases revealed a troubling trend,” said Stockwell. “Contagious individuals were found to have come into contact with hundreds of people. This led to a sharp rise in possible infections on post. From there, we knew we needed to intervene to stem the rise of the virus. Soon after, USFK commander Gen. Robert B. Abrams declared a Public Health Emergency.”

“Contact tracing was our most important effort,” said Michael Duncan, the Directorate of Public Works operations officer and a member of the task force in a statement. “It taught us how the virus spreads, which led to the creation of the public health measures we use today.”

The taskforce reports all recent COVID-19 cases from abroad, but individuals who tested positive have not spread the virus.

“Task Force 37 led the way in defeating the virus,” Tremblay said. “By doing exceptional work and sharing their methods widely, they set their place at the forefront of the Army’s response. I am immensely proud of them.”