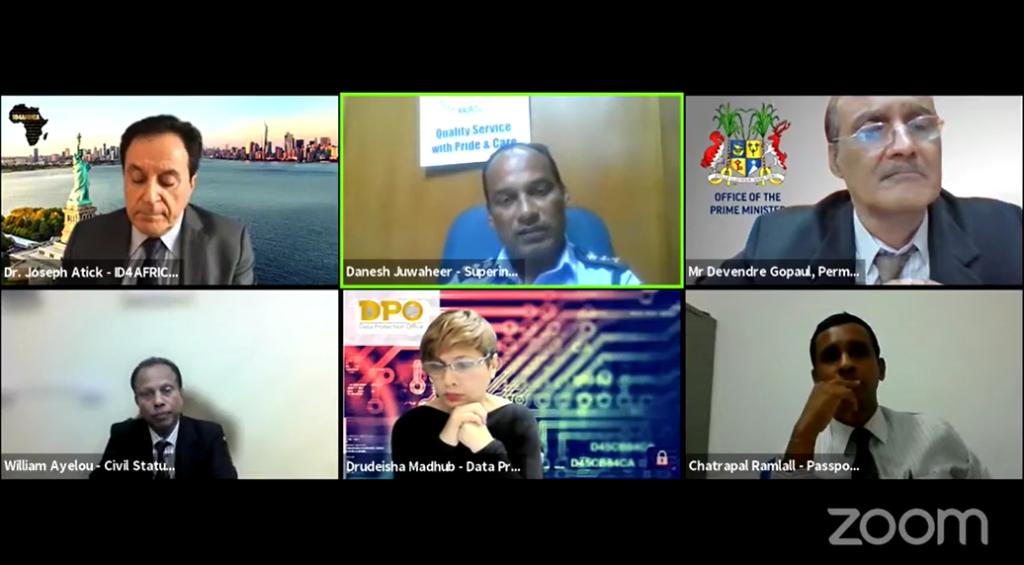 The island Republic of Mauritius has had significant success in implementing a digital ID system for its citizens, and how it has done so, as well as the vision and strategy of the country going forward were the subjects of an online event with the participation of the key stakeholders involved in the process.

The event, organized by ID4Africa, was the 12th in a series of livecasts that examine different aspects around digital identity.

Moderated by ID4Africa Executive Chairman, Dr. Joseph Atick, the livecast had 10 panelists, all of them representatives of identity stakeholders in the country of roughly 1.3 million people.

They included Devendre Gopaul, the permanent secretary at the prime minister’s office as lead panelist; William Ayelou, a civil status division official and ID4Africa ambassador; and Drudeisha Madhub, data protection commissioner. They discussed the complex interplay between government bodies, the data protection authority, and the courts on how biometrics could be used within the digital ID system.

In his introductory remarks, Dr. Atick noted that despite Mauritius being a small country, it has been able to make giant strides as far as digital identity is concerned, and has lessons which should be learned by other countries implementing identity projects.

The country was able to deal with some of the intricate issues associated with digital ID and biometrics at an early stage, paving the way for its digital transformation and an ICT strategy that is anchored on digital identity. The country has plans to achieve a digital Mauritius vision and create a data-driven economy by 2030.

“Mauritius may be a small country…but it has already dealt with the more intricate issues related to digital identity always encountered in countries with populations even larger than that of Mauritius. This is particularly true when it comes to legal issues and privacy and constitutional questions about biometrics. The outcome of this is a performant and scalable identity ecosystem that has earned the trust of the citizens,” said Dr. Atick.

Panelists took turns speaking on different issues which included foundational aspects around identity like the constitution and the legal framework; how the ministry of technology is supporting the digital ID vision; sectorial collaboration for various relevant sectors; the use of digital identity especially in banking, health, law enforcement and immigration, as well as digital identity and elections. They also shared experiences and discussed best practices that have enabled them put Mauritius’ identity system in place successfully.

Gopaul gave an overview of how the identity system in his country works. He said the civil status division, which is under the supervision of the prime minister’s office, issues identity documents and operates within a well-established legal framework which is constantly being revised in order to meet the exigencies of the moment.

This framework, he said, consists of a civil status Act, a data protection Act as well as other legal instruments which govern the flow of electronic data. The official also mentioned other efforts being made by the country to improve and secure its digital identity ecosystem, saying they are also looking forward to having a state-of-the-art system in place with enhanced security features by 2023.

Panelists also discussed data protection and privacy at length and were unanimous that countries need to put in place adequate legal frameworks so as to better govern their digital identity systems and ear the people’s trust.

“…if there is one message that we are going to leave our audience with is the fact that legal frameworks for identity systems matter. Data protection is going to become a paramount consideration….Before you even launch your ID system, you’ve got to be thinking about data protection and building the trust of the population,” Dr. Atick said. He thanked their partners and the government of Mauritius for their efforts in ensuring the event was held.

The livecast on Mauritius’ identity ecosystem comes after similar ones on Nigeria and Tanzania.

ID4Africa will hold another livecast on infant identity management and the legal identity agenda on February 24. Discussions during the virtual event for which registration is ongoing will center on how to get legal identity right from the start. It will include policy discussions and an exploration of business practices and technology including the latest research on biometrics. The lineup of panelists for the event has already been completed, but room remains open for any suggestions related to the event.

This event, the ID4Africa EC said, will be followed by another on March 10 which will with focus on gender matters in identity management. Two others are scheduled for April 8 and 28 and then May 13, and will respectively discuss vaccination certificates and identity management and ID management and biometrics for elections in Africa. The events are open to industry players, development agencies and governments and a call for participation for the May event will be opened next month.

Other episodes in the country progress report series will also be held in May.