Another batch of edge AI products are starting to reach the market, with Xilinx and AonDevices offering up new announcements, while Edge Impulse is offering a development platform that will make it easier to develop applications for Nvidia’s Jetson Edge AI platform.

The attributes of edge AI chips—performance and data privacy—mean that biometric applications are expected to be key sales drivers for these companies. The face biometrics market is expected to reach $15B by 2027, with voice recognition revenue reaching another $7.7B in that same period.

Xilinx, which is set to be acquired by AMD in a $35 billion stock deal, announced a “system-on-module” targeted for use in smart factory and smart city applications. The new Kria module design combines software and Xilinx Zynq field programmable gate array (FPGA) chip that the company says is well suited for applications where cost is a prime consideration for device makers. The FPGA design means performance does not suffer: Xilinx says that customers can expect vision recognition applications to have up to three times better performance compared to GPU-based modules, meaning that security and traffic cameras, machine vision applications and vision-guided robots can be designed with the product.

While a number of startups have announced intriguing chips designed specifically to run AI applications, Xilinx is offering the FPGA architecture as a cost effective, high performance alternative. FPGAs are reconfigurable, but not software programmable in the same way a CPU is. A desktop CPU is designed to efficiently process instructions in serial sequence, and supports a set of instructions that do not change, making them fairly easy to program.

With an FPGA, the customer configures the compute engine to their specification, and instructions are compiled and used to connect the chip’s logic modules “by a mesh of programmable wires” according to Intel. Because FPGAs execute instructions in parallel, they are suited to many vision processing functions. FPGAs offer high performance per watt compared to GPUs, which are another popular chip type for use in biometrics and video processing. 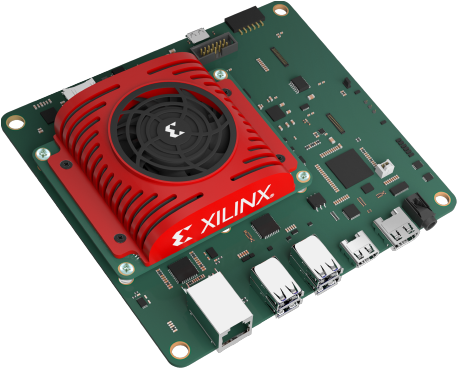 AonDevices initially prototyped the solution on the Xilinx Zynq-7000 FPGA but can be delivered as an ASIC, according to the company.

“By adding artificial intelligence to our advanced wireless communication ICs, it offers the potential for voice activity and hotword detection at the edge in headsets, remote controls and other applications where performance, high noise-resilience and battery lifetime are crucial,” said Arend van der Weijden, VP of Wireless, Audio and Voice BU at Dialog Semiconductor in a press release.

AONDevices said it has licensed its AONVoice edge AI processor technology to top tier semiconductor companies and is currently demonstrating best-in-class performance results in both ASIC and FPGA designs.

Edge Impulse says the combined development platform Nvidia hardware and enables customers to ingest and classify 99 percent of critical sensor data to improve algorithm performance, compared to other system designs that wind up filtering data before running algorithms for facial recognition, for example.

Edge AI being driven by interest in biometric solutions

The edge AI market is red hot, with biometric identification and facial recognition being two big keys to that interest. Apart from the aforementioned market revenue, global consulting firm Deloitte has estimated that in 2020, more than 750 million edge AI chips were sold, and could reach or exceed 1.5 billion a year by 2024.