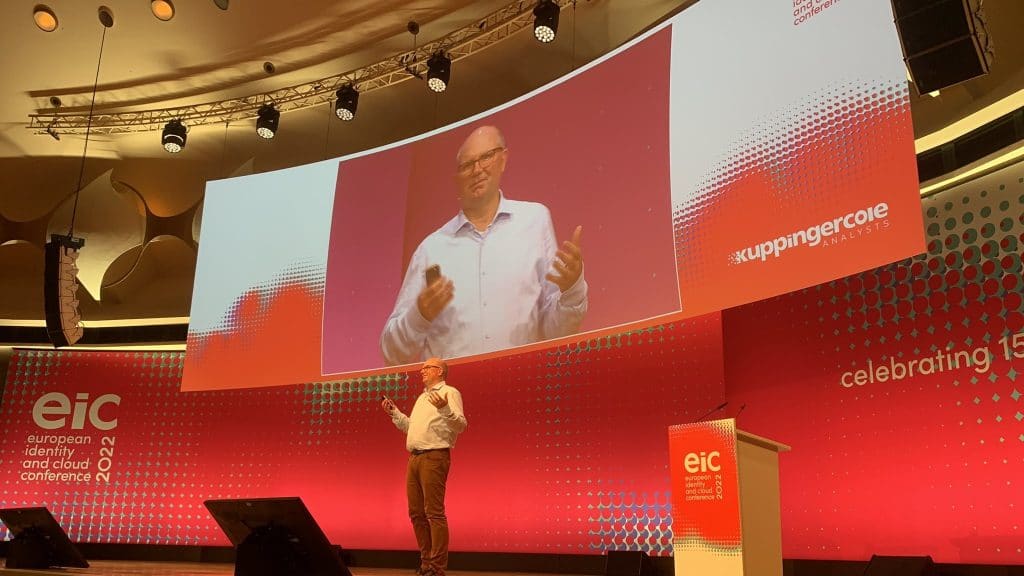 We’ve already highlighted great content from EIC 2022. In this piece I’ve picked the best web3 and decentralized identity sessions and a few not to miss insightful presentations. For an American like me, KuppingerCole shows a European perspective of the digital identity industry. This is helpful to get out of a North American echo-chamber and see a different perspective.

It seems that everyone is evoking Kim Cameron’s comment, by bringing an identity layer to the internet. In his session, ‘IAM 2025: Integrated, Agile, Flexible. Decentralized?’, KuppingerCole Founder and Principal Analyst Martin Kuppinger introduces his concept of the Identity Fabric, which is a multi-cloud, multi-hybrid vision of the internet’s identity layer.

Kuppinger goes on to describe the characteristics of this identity fabric as modular, flexible, policy-based microservices exposing their functionality via APIs so they can be integrated into decentralized workflows. This fabric doesn’t just apply to humans, but to systems, services, and resources. (I would add IoT devices, sensors, data, digital twins and legal identity as well.) It’s a worthwhile vision which requires a part to be played by everyone in the identity industry.

EIC 2022 had a lot of web3 and SSI sessions. We as an industry are still collectively figuring out what web3 means to digital identity. Where is the overlap? Where are the bridges between web2 and web3? What have we achieved? And what do we still need to do?

Irene Adamski from Jolocom gave an overview of the journey of SSI adoption in her ‘Quo vadis, SSI?’ which highlighted the successes of production use cases and growing interoperability, the challenges of convergent solutions and risks for broader adoption of SSI in Europe.

Markus Sabadello presented real world interoperability in his ‘Transatlantic SSI,’ which shows interop between two projects in the U.S., the DHS digital permanent resident card and in Europe, the EBSI/ESSIF Digital Diplomas projects. Sabadello with his company Danube Tech is instrumental in developing the infrastructure technology that facilitates SSI interoperability. This reflects his belief that “interoperability should not be a second thought.”

Jackie Shoback gave a data rich presentation of the state of web3 in her ‘Creative Disruption: How Web 3 Models are Capturing Markets & Customers.’ It’s a balanced introduction to the web3 opportunity full of use cases and hard data.

While most of the sessions focused on decentralized identity, PhD cybersecurity student Rohon Kundu presented ‘Cloud 3, Decentralizing Cloud Storage with Web3,’ a solid overview of the benefits of decentralized cloud object storage of which I am a fan. Kundu’s presentation shows the security benefits inherent in web3 decentralized cloud storage for combating sybil, routing and phishing attacks.

Adrian Doerk presented lessons learned in his ‘Designing an European Identity Wallet: An overview of UI and UX aspects.’

Anonybit CEO Frances Zelazny makes the case that digital identity management is at the core of solving the security problems introduced by web2 technology and shares her vision for the future of identity management solutions in her ‘Identity Management in a Web 3.0 World’ presentation.

While some in the mainstream identity industry are still debating the value of the web3, Katerina Dow’s thought-provoking keynote, ‘The Omniverse SWOT’ is sure to make you think. Dow presents a vision of the convergence of physical and digital realms based on the trends since 2012.

One of the final problems Dow mentioned in her presentation is the risk around building new technology without social protections. This is a real concern, since regulators are just beginning to deal with this data and privacy problems from web2 technologies.

Eve Maler, CEO of ForgeRock, addresses the sticky topic of technology ethics in her ‘What Does It Mean to Package Ethics Into a Technology Stack?’.

The advantage of remote and streaming accessibility

One of the silver linings of the past two years of online conferences is that if you can’t attend an event today, you can often still access the thought provoking content. The above sessions were what caught my eye from the agenda, and you could make an argument that even if you did attend in person, you would not have been able to catch all the sessions in person.