This ring uses gesture recognition to write words and numbers 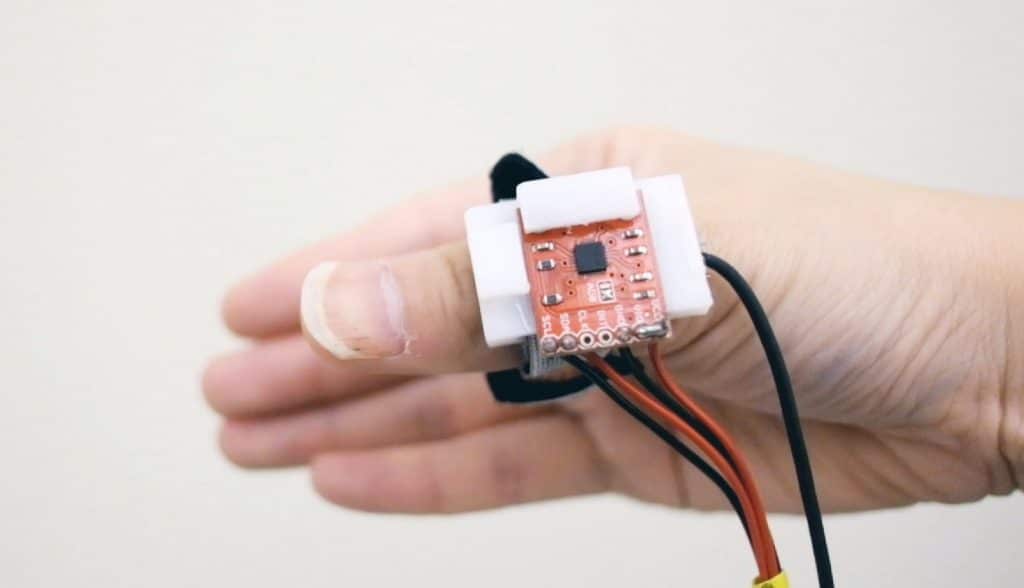 This is a guest post by Kayla Matthews, a biometrics and technology writer.

The technology enables people to trace numbers and letters on their fingers, with the figures appearing on a computer screen.

Users can also navigate left, right, up and down with the appropriate gestures. Effectively, the device can serve as both a keyboard and mouse, when compared to conventional computer navigation.

The system works around a thumb ring, fitted with a tiny microphone and gyroscope. Users move their thumb across fingers for the hardware to detect the movement and convert the signage to numbers and letters.

The technology’s video demonstration showcases the exciting system in action. The wearable ring constantly monitors the input and automatically reacts when receiving the right input, using an onboard contact microphone to continuously listen to and analyze actions while canceling out ambient noise. The only noise the microphone regards is the thumb moving across the hand. The sound is again analyzed by a machine-learning classifier, to help eliminate superfluous noise. A pattern recognition algorithm then helps to identify the gesture the thumb is making across the hand.

The video demonstration also explores potential applications for the device. One option is single hand interactions with smartwatches or using a mobile phone even when it’s not within reach. The video shows someone utilizing FingerSound to converse in a text, without even touching their mobile phone. For those with a disability that renders text messaging difficult or impossible, FingerSound can be a great tool.

The video also shows how one can use the gestures to converse or write content during a meeting, with remote control laptop functionality. FingerSound can help those in a meeting respond to others via text without it being a distraction. Additionally, one can use FingerSound to snap pictures in Google Glass with a single gesture. Great photography can be contingent on being there at precisely the right moment, which FingerSound can alleviate. From business to hobbies like photography, FingerSound has a variety of potentially exciting applications.

Also exciting is FingerSound’s potential involvement in virtual reality. In theory, one can use FingerSound as a device for control without the need to remove a head-mounted device, which is often a requirement to input commands via a keyboard or mouse. Without requiring the need for removal of a virtual reality device, virtual reality can appear even more immersive with the aid of FingerSound.

FingerSound’s role as a wearable device works in its favor as a non-obstructive tool. Unlike other wearable input devices that stick out like a sore thumb, the minimalist approach of FingerSound is more socially acceptable. Although there are other gesture systems available, they often require the user to perform gestures in the air, which can be distracting and arduous. The simpler, more accessible approach of FingerSound is more appealing to the complexities of other devices. Additionally, the contact microphone and captured motion data make for an experience that values accuracy.

Other types of similar technology include FingOrbits, where the wearer can control smartwatch apps by rubbing their thumb on their hand, in addition to SoundTrak, where users can create 3D doodles or woods in the air by localizing their finger position in 3D space. Previously, the same Georgia Tech researchers responsible for FingerSound showcased new technology that aided smartwatch control with breaths, swipes and skin tapping.

The Georgia Tech researchers are making impressive strides in resolving an issue many have with smartwatches and virtual reality: inaccessible, clunky and distracting control interfaces.

The research team strives for a system that’s continuously available with a high ease of use, which FingerSound appears to most certainly accomplish.