Biometrics and identification technology company Suprema, Inc. has launched a new series of fingerprint embedded modules featuring an updated CPU, and a variety of new features for use in applications from point-of-sale systems to access control. 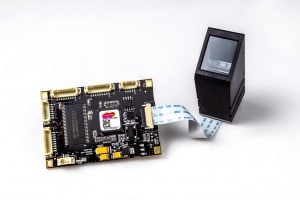 The SFM5500 Series is suited towards mobile biometrics, and high-volume applications such as access control, POS systems, time and attendance, and card readers.

“The new SFM5500 Series will provide our customers with more confidence in designing devices for various applications requiring high-volume processing, as it offers flexible customization as well as enhanced performance thanks to an upgraded CPU.” said Suprema vice president Young S. Moon said in statement. “With biometric technology becoming more popular for mobility, such as with smartphones, the SFM5500 Series will bring our customers more opportunity to expand business across various applications.”

Earlier this year, Entertech Systems, Suprema’s official operating partner in the US, UK and other markets, launched the Suprema BioEntry Plus finger-only reader as an affordable way for companies to move from card-based access control to a more secure biometric solution based around fingerprint ID.