New data from a report commissioned by Jumio and conducted by Opinium suggests the vast majority of consumers around the world feel safer interacting with brands that are providing digital identity verification measures. 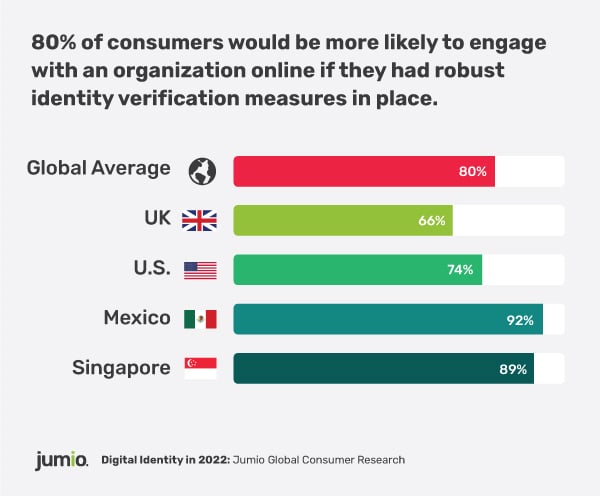 Conducted between April 7 and 14, 2022, the survey took into account the responses of 8,000 adult consumers in the UK, U.S., Singapore, and Mexico, and found that, following the wave of digitalization caused by the pandemic, 57 percent of them now use their digital identity “constantly” or “often” to access their online accounts.

From a geographical standpoint, Singapore consumers are the ones using digital identity more often (70 percent), followed by Mexico (55 percent), the U.S. (52 percent), and the U.K (50 percent).

In terms of industry sectors where digital identity is more required, the majority of respondents in all four countries agreed financial services are at the top of the list.

Interestingly, healthcare scored second in the U.S., U.K., and Singapore, but not Mexico, where 52 percent of consumers said digital ID verification is particularly important in the social media sector. 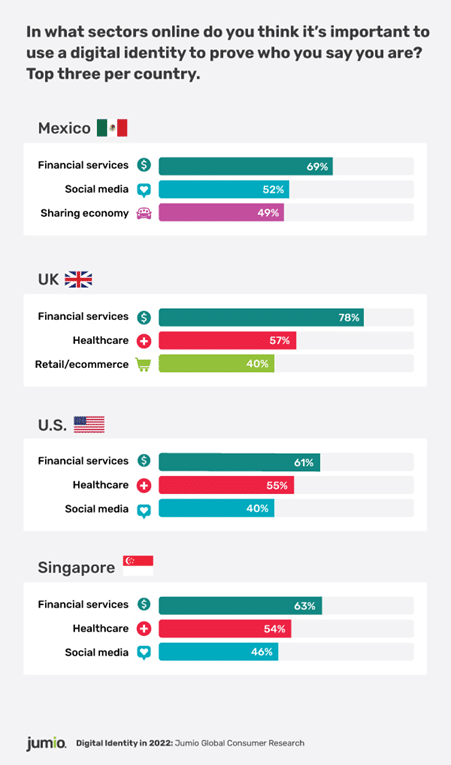 Trust in the digital ID ecosystem is also a hit-and-miss, according to the Jumio report.

In fact, roughly one-third (34 percent) of those surveyed said they believe that their bank has implemented more online identity verification checks since the pandemic, and in the gaming and gambling space, less than half (41 percent) say they were “confident” that providers are doing what they can to accurately verify identities.

Moving forward, Jumio believes both use cases and benefits of digital identity extend beyond just fraud prevention and could provide a solution to broader consumer concerns.

“As our use of online services only continues to grow, organizations are clearly implementing the robust identity verification methods required to [protect] against the risks associated with virtual services,” explains Jumio’s Chief of Digital Identity Philipp Pointner.

However, according to the executive, the research also reveals increased demand for digital identity solutions, particularly in the financial services and healthcare spaces.

“Implementing these kinds of solutions should be a ‘when,’ not a ‘maybe,’ and will now ultimately determine whether a consumer chooses your business over another.”

The report’s results are reflected in revenue growth from Jumio’s face biometrics and anti-money laundering checks in the first quarter of 2022, and its release comes weeks after Jumio hired Susan Walker as its new chief financial officer.