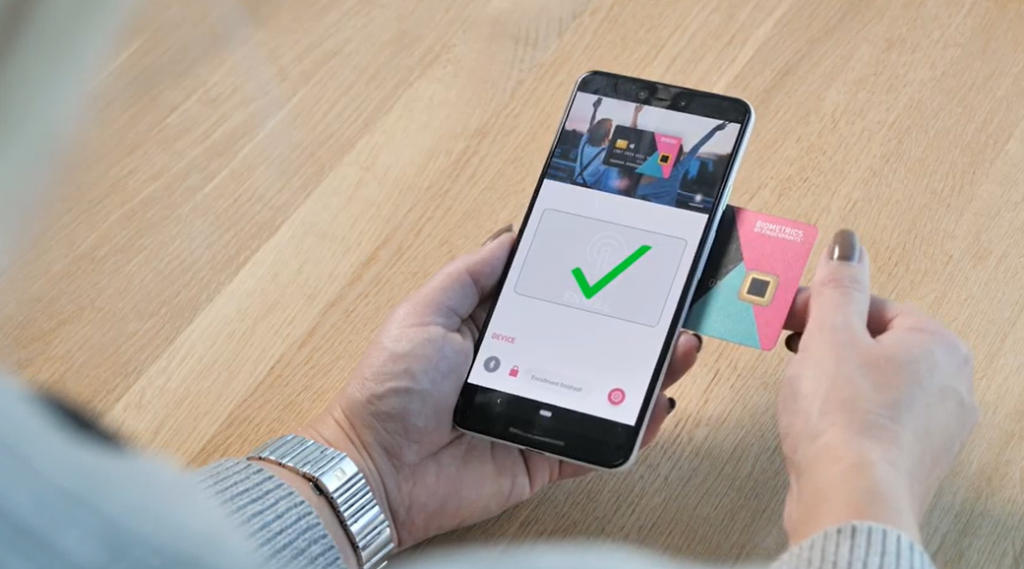 From promotional materials released by players in the biometric payment card ecosystem to the spotlight at the Asia-Pacific Smart Card Association’s (APSCA’s) big annual event, how to perform fingerprint enrollment to cards is the theme of the week’s top stories in biometrics. Questions about home enrollment sleeves, like what they will be made of, and where LEDs should be placed to guide the process will have to be answered to support mass adoption. Advances in America’s digital ID system and a new NIST report on facial recognition with masked faces also made headlines.

Videos from Mastercard and Idemia highlights the state of the art for enrollment to biometric payment cards, while Thales explores the place of the cards in the payment ecosystem, in Biometric Update’s most-read story of the week. How many touches enrollment takes, whether it is conducted with a sleeve and whether the sleeve is made of cardboard or plastic has been a topic of particular intense industry focus of late.

APSCA’s Next-Generation Cards Virtual Global Expo and Summit featured a pair of sessions on biometric payment cards featuring representatives of Visa, Mastercard, Idemia and STMicrolectronics, Infineon, and Zwipe. The enrollment sleeves add at least a couple of dollars in cost to the process, but given that $228 billion was transferred using biometrics in 2019, and all that has happened since, the attention on the market is understandable.

Fingerprint enrollment was the specific focus of another session in the APSCA event featuring Idex Biometrics’ Jerome Chavanel, which covered the importance of the problem and the solutions on offer. Pseudo-dynamic enrollment may bridge the gap between the current state-of-the-art and a process that can support mass adoption.

Fingerprint Cards and M-Tech will work together to tackle the Indian market for biometric payment cards with the biometric company’s T-Shape module. The Rs 2,000 (US$27) contactless payment cap in the country could be eliminated with biometrics, so the market is large.

Deepfakes continue to be a major concern, but it is questionable how much progress has been made about what to do about them. The U.S. Senate is not ready to act, and concerns are rising around the world, though the New York Times points out that powerful AI systems are still fallible.

Expectations are growing that digital ID will be a higher priority for the U.S. government over the next several years, and a potentially major piece of legislation is taking a lead-off at the end of the current session. At the state level, Colorado law enforcement has announced it will accept mobile driver’s licenses, in a landmark decision.

A newly-published patent application from Apple shows work on a head-mounted wearable, possibly with voice or gesture recognition for user authentication provided by a range of sensors measuring everything up to skin deformations in the user’s head. The biometrics may be sensed by headphones, eyeglass frames, or other areas of the face and head.

The accuracy of facial recognition developed since the onset of the pandemic on people wearing masks is examined in a new NIST report, which shows significant improvement in the technology.

The BBC talks to NIST’s Mei Ngan, Tech5’s Rahul Parthe, and Trueface’s Shaun Moore among others, about the effects of the now-ubiquitous face mask on facial recognition, noting the mix of challenge to the technology and opportunity for business cases.

New reports from a group of academic experts and The Turing Institute each deal with a different aspect of ‘bias’ in facial recognition. Researchers from MIT, Universitat Oberta de Catalunya Barcelona, and the Universidad Autonoma de Madrid have discovered that the relative lack of different facial expressions could make biometric systems less effective, while an explainer from Dr. David Leslie looks at performance disparities between demographics from a human rights perspective.

A lack of trust scuppered the Australia Card a generation ago, and a Women in Identity Australia webinar panel discussed what trust means in the context of the digital economy and increasingly digitized society, and what needs to be done to win and preserve it.

Influential AI researcher and algorithmic responsibility advocate Timnit Gebru has been let go by Google, or possibly resigned. It is clear from the Twitter record and a TechCrunch report that there was a conflict between Gebru and Google over what the researcher perceives as the hollowness of the company’s diversity, equity and inclusion (DEI) programs.

Aerendir Founder and CEO Martin Zizi had his “extraordinary ability” visa application denied after having a non-immigrant visa accepted, and is suing the Trump Administration in response, The Mercury News reports. California-based Aerendir employs a dozen people, and Zizi has a medical degree and a Ph.D.

As work towards inclusivity continues around the world, Special Olympics Nigeria Initiatives and Programs Manager Ibiyemi Ayeni tells Biometric Update about the group’s Mission Billion win for its effective ID registration program for Special Olympians, which includes biometric enrollment. The scheme could help extend NINs to people with and without disabilities throughout the country.

As people around the world seek to improve the accessibility and level of assurance provided by identity systems, Yoti Identity Fellow Tshepo Magoma writes about the concerns about and potential of electronic voting machines and remote voting in his latest guest post.

Risk is both a constant concern for financial institutions, and a complex one, so Ekata VP of Global Marketing Beth Shulkin delves into the difference between credit and fraud risk, and how organizations can protect themselves against both. Do not confuse them, Shulkin warns, as credit data is not an effective tool for combatting fraud risk.

The risk of fraud attacks against call center systems has increased along with call volumes, Pindrop CMO Mark Horne writes in another guest post. IVR systems have become the most problematic attack environment for many businesses, putting the onus on organizations to adapt their fraud prevention strategies.

The importance of flexibility to onboarding and the role of enhanced due diligence with selfie biometrics is explored by Trulioo COO Zac Cohen for Fintech Finance. He makes the case that “healthy friction” is just part of the process.

Machine learning models are frequently being undermined in real world scenarios by “underspecification,” according to a Google research paper reported on by MIT Technology Review. A machine learning engineer not associated with the research calls it a “wrecking ball,” and it suggests a lot more testing is necessary to even begin to understand how the effectiveness of models in the lab will translate to practical applications.

The promise and peril of artificial intelligence, along with its place in a Christian worldview and several other aspects of the technology are explored in a fascinating episode of the Undeceptions podcast. The conversation takes a long view, and ranges from pop culture references to the complex intersection of advanced technology and contemporary theology.

The Biometrics Institute has reconfirmed the organization’s mission, and Chief Executive Isabelle Moeller invites industry participants to join it in a LinkedIn post. Members get free access to the Institute’s papers and reports, and half price access to its paid events.

Please let us know if you would like to share an interview, podcast or other content with the biometrics industry and broader digital identity community in the comments below or via social media.