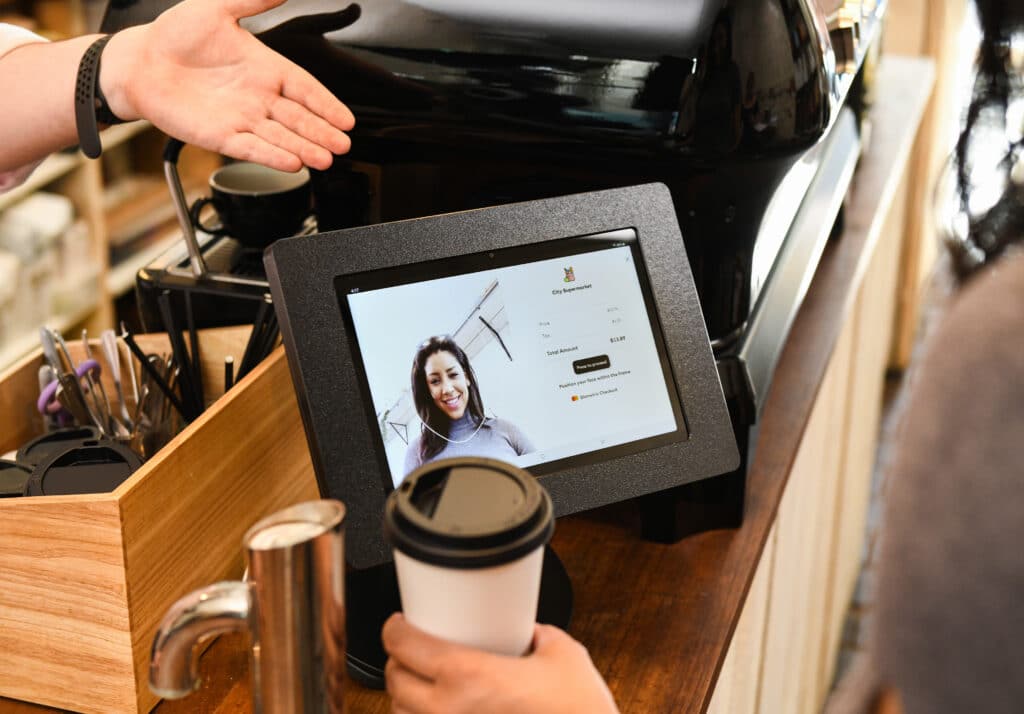 Mastercard launches its Biometric Checkout Program for ‘pay by smile’ facial recognition payment authentication with Brazil’s Payface at five São Paulo supermarkets. The program will also allow customers to wave their hand over a reader to pay with vein biometrics as the pilots roll out in other markets.

Users will register their biometrics with either a merchant or identity provider app, and either at home or in store. Alongside Payface, other partners include PopID with a similar offering for smile-to-pay technology in the U.S. NEC, PaybyFace and Fujitsu are involved as is India’s Aurus, an innovator in payments.

“The way we pay needs to keep pace with the way we live, work and do business, offering choice to consumers with the highest levels of security,” says Ajay Bhalla, president of Cyber and Intelligence at Mastercard. “Our goal with this new program is to make shopping a great experience for consumers and merchants alike, providing the best of both security and convenience.”

The Mastercard pilot covers five outlets of St. Marche supermarkets in São Paulo when it launches this week. In this pilot, users will register their biometrics in Payface’s app along with their payment details. At checkout, they simply need to smile at the camera and do not need to have their smartphone with them.

Asked what response he expects from customers, Eládio Isoppo, chief executive officer at Payface, told Biometric Update in an email: “Our proposal is to create a more convenient and agile process of check out on physical stores. In this sense, the best response we can get from customers is to have their recurrent usage, opting to use payface every time they make a purchase on a partner after they have joined.”

Isoppo says Payface has already had hundreds of new customers sign up in the first days of operation at St. Marche and use the service multiple times.

“We’ve been developing Payface since 2018 to transform the way people pay into something as pleasant as the act of consuming in Brazil,” Isoppo says of the geographical side of the rollout plan. “We still have a great challenge in this huge market so for now our job is to make life easier and bring the joy of a smile to payments to our current market.”

Progress for the partnership with Payface has been swift as the Brazilian firm was accepted into Mastercard’s ‘Swift Path’ accelerator scheme at the beginning of 2022.

However, the overall move into facial recognition payments comes five years after rival Alipay launched smile-to-pay in retail settings. Alipay promoted the launch with both subsidies for retailers and promotions for Alipay users. It was soon followed by Tencent’s WeChat Pay.

Amazon has just launched the first use of its Amazon One palm-based payments system outside the Seattle area with an integration at a Whole Foods in Austin, Texas. Attempts at deploying the service beyond Amazon firms have proved more challenging.

Mastercard believes the time is right for the next step in biometric payments, along with biometric payment cards, building its products on the EMV 3-D Secure standards. It has operated selfie pay online, based on standards such as those of the FIDO Alliance (Fast Identity Online).

Mastercard’s New Payment Index 2021 found that 93 percent of consumers worldwide are considering using an emerging payment method in 2022 and that 60 percent feel safer using biometrics to verify a purchase rather than a PIN.

The shift to contactless, then to biometric payment cards and now fully biometric payments has been accelerated by the Covid pandemic as consumers and retailers seek more hygienic and efficient ways to pay.

Mastercard states there are fewer chargebacks and higher approval rates with biometric matches and integrating biometrics can improve customer loyalty and engagement. 68 percent of respondents said they are more excited to shop at retailers that offer the latest payment methods, according to the New Payment Index.